Arts & Humanities Faculty Research in the time of COVID-19 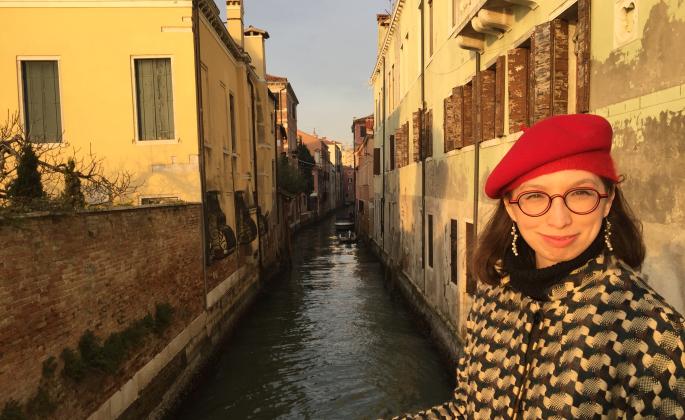 When did you first start thinking about COVID-19? I mean beyond responding to it in your daily life, sheltering in place, and in your professional life, reconfiguring your classes for remote instruction?

I began hearing from friends, particularly those living in NYC, about hate crimes against Asians and Asian Americans and realized ethnic scapegoating was happening yet again in the history of the world. As a late medievalist and early modern scholar of Venetian art, plague is a recurring factor. Giorgione and Titian among other artists died of plague. Venice developed a number of healthcare practices in response to recurrent disease. Perhaps most famous among them now is 'quarantine.' I have visited some of the Lazzaretti islands, islands where Venice quarantined incoming ships – and often purloined some of the goods. I think about state sanctioned theft with reports of hospital PPE orders seized by federal power.

COVID-19 offers an opportunity to rethink cultural assumptions and habitual practices, but like every opportunity, what happens next could be better or worse. Humanities trains us to think about human values and how cultures operate. Decisions that seem irrational by economic measurement or 'self-interest' are revealed to be logical when examined through values like identity, community, and heritage. My hope is that we will be able to have a conversation about what we want the world to be and start taking the steps to refashion it.

What were the research questions you were asking beforehand and when did you first start connecting COVID-19 to these questions?

I've long been interested in multi-ethnic societies and how stability can be achieved through ideology despite ongoing racism, xenophobia, and legalized inequality. Venice is such an odd case. As an early modern international entrepôt, the state was entirely dependent on a foreign and heterogeneous population, both transient and resident. COVID-19 makes us think about the Other continuously. People are experiencing the unsettling realization that the Other has become nearly everyone. Now anyone who doesn't live in your house is a potential threat. That includes family members, lovers, co-workers, those we are accustomed to trusting and viewing as 'same,' not potential transmitters of a 'foreign' virus.

The swiftness of travel bans globally and the sudden halt to relatively free movement is connected to fear of the Other. Movements of people was also an early modern concern. In addition to anxiety around falsified identity, Early Modern Europe greatly feared the stranger bearing contagion. These fears usually expressed themselves in racist ways e.g., Jews accused of poisoning holy water in Christian churches. The term "Chinese virus" is a way of identifying the virus as a foreign agent, a contagion from elsewhere. It allows for a simplistic us vs. them/ local vs. foreign conceptualization of virology and contagion. My research looks at alterity, how the concept of 'the Other' was formed and used in Venice, an international and diverse city that nonetheless practiced and legalized prejudice and racism. As an Asian person myself, the resurgence of yellow peril violence is yet another reminder that tolerance is a conditional state.

What questions do you think you’ll be asking six months from now?

I'm thinking about cultural change. One of the interesting things about teaching research projects is learning what the Zeitgeist questions are. Five years ago students asked a lot of research questions about fame and notoriety. They wanted to know how something became known. This year most of my students are doing research projects about cultural change. They want to know why something stopped and why something else started and why it was that particular new thing that happened and not something else. What I would like to know is what happens next. We hear a lot about how a pandemic reveals the worst and best of us, but what happens after?

We already know what we fear: increased government surveillance, the end of democracies as autocrats seize control during an emergency, the loss of independent arts organizations and smaller scaled human projects. Will our fears come to pass or will we be able to generate solutions and implement them?

The great cultural struggle of the 21st century has been over globalism. With COVID-19 its benefits and detriments are obvious. The social and economic stratification is magnified during shelter in place orders. Movement of people aids transmission of disease, but the movement of goods and knowledge is crucial to managing the virus. This mismatch of desired but dangerous physical movement and begrudgingly accepted intellectual movement transmitted through electronic means is causing great cultural confusion embedded in how we defined community, ours, and the foreign, the Other.