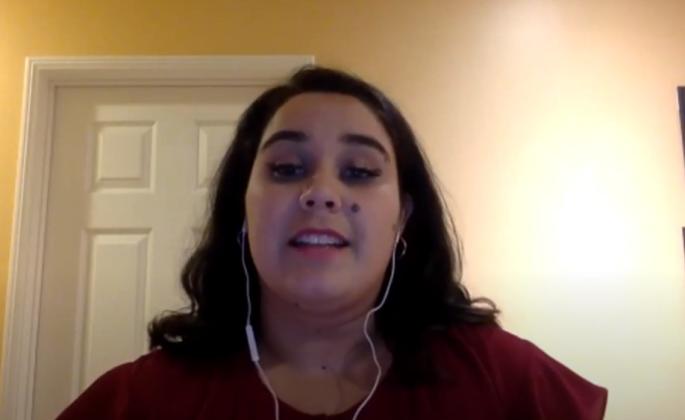 On Friday, April 24, Acting major Reilly Milton (’21) represented Sonoma State in the CSU Student Research Competition.  Her presentation, “Biraciality on the American Stage:  The Dramatic Performance of the Role of Margaret in Origin Story by Nathan Alan Davis,” discussed and analyzed her work performing in the play Origin Story, produced by the Department of Theatre Arts & Dance in October 2019.

As part of the competition, Reilly submitted a five-page summary of her work on this creative project as well as photos and video from the show; gave a ten-minute recorded Zoom presentation; and on April 24 participated in a live Zoom Q&A session with faculty judges from around the CSU.  Stacey Pelton, Student Research Analyst in SSU’s Office of Research & Sponsored Programs, commented “I could tell that the judges were really impressed and interested in her work.”

Reilly’s was one of six Sonoma State projects selected from a campus-wide competition to represent SSU in the statewide competition.  In the final statewide round, she competed against a joint pool of undergraduate and graduate students.  Reilly was mentored in the preparation of her dossier and presentation by Prof. Scott Horstein, head of the Theatre Studies program in the Department of Theatre Arts & Dance.

Congratulations to Reilly on her achievement!